Nautical Army Of Volunteer Yeomen that is NAVY. The very proximity of Naval ship coincidentally deters military aggression and reassure supporters, buckler sea byways, and the trade that pours through them, preserve territorial waterway boundaries and the right to resources contained therein, and facilities response to a natural disaster. For the Recruitment in the Indian Navy, you must have the proper knowledge about the Indian navy. For Indian Navy Recruitment 2020, the highest-ranked naval officer is the chief of the naval staff. India uses the Midshipman rank its navy, and all future officers carry the rank upon entering the Indian Naval Academy. They have commissioned sub-lieutenant upon finishing their course of study. 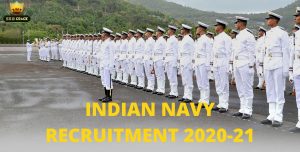 The life of an officer in the Indian navy depends upon the unit and rank. Starting from the training the cadets have a very tough schedule. People are always running short on time. The job of the Indian navy Is a very tough job for both physical and mental strength is required. Every defense sector have their motto as similar to that Indian navy also have their motto, on seven seas we learn Navy’s stern call: faith, courage, service true, with honor, over honor and overall.

There are several ranks in Indian Naval. Let’s discuss the rank of the INDIAN NAVY here is the following-

Here we discussed the main topic in which every candidate has excitement to learn about something.

In PFT it consists of 1.6 km run to be completed in 7 min, 20 squats ups, and 10 push-ups. The candidates undergoing PFT will do so as their own risk. Those candidates who qualified will call up for a medical test

View all posts by ssbcrack →